I get commissions for purchase made through links in this post(this costs you nothing extra). Thanks!

Cup noodles is a staple dish for most college students and youngsters. It’s an easy-to-make- food as it requires zero effort to prepare it.

Although it’s the most favorite dish with people of all ages across the US,  the question they ask is ‘can you microwave cup noodles’? 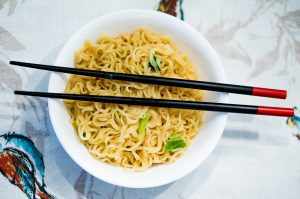 The answer is No. You should not microwave cup noodles. Most containers come with a label that states that ‘cup noodles isn’t microwave safe’. Instead, you can boil water and put it into the indicated fill line on the cup, cover the noodles and allow it to cook for about 3 minutes.

Also Read: Can You Microwave Styrofoam?

What Are Cup Noodles?

Momofuku Ando (from Taiwan) is the man behind cup noodles – that’s back in 1958, and after a couple of years, cup noodles is still the most consumed dish around the globe. It owes its profound success to the fact that it brings convenience to the table.

If you decide to use old-school methods to prepare noodles, then the dish will require lots of hard work. For example, it takes hours to get the broth so as to achieve the best tastes and flavors.

To mention, cooking noodles from scratch is time-consuming and requires a lot of effort.

For this reason, the invention of cup noodles is now more than revolutionary. It proves to be more suitable as it simplifies the lengthy process of making a whole bowl of noodles and broth.

Why can’t you put cup noodles in the microwave?

If you take a closer look at the cooking directions you’ll notice that the manufacturer barely tells you to begin microwaving in the entire procedure.

But if you check out the Cup Noodles cover, you’ll find clear warnings that advise you not to throw it in the microwave though not in all containers.

Here are two crucial reasons why you shouldn’t microwave cup noodles, and both have a lot to do with how the cup’s materials react to the waves produced inside the microwave.

By putting the cup inside the microwave, you expose it to extreme heat and clearly use it for a purpose it’s not invented for. Doing so can result in an unforeseeable chain of different chemical reactions.

Failure to follow, not following the provided instructions can unintentionally lead to a release of dangerous chemicals into your noodles.

On the other hand, exposing the cup to extreme or high room temperatures can compromise the cup’s structural design. The interior part of your cup is designed to hold hot water, but these other parts can’t handle such heat.

How Long Do You Microwave Cup Noodles?

Once you add hot water to the cup noodles, cover the cup with a lid and allow the noodles to cook for about 3 minutes. It will absorb the hot water and cook with resting heat.

If you remove the cover before the three minutes are over, the noodles will end up being crunchy and unevenly cooked.

Is It Safe to Microwave Ramen in the Cup?

Can You Microwave Styrofoam Cup Noodles?

No, you can’t microwave Styrofoam cup noodles because disposable containers are not designed for cooking. Manufacturers produce Styrofoam cups either from expanded plastic or plastic with a recycling digit-6 indicated at the bottom of the cup.

The plastic container considered to be microwave-safe is type 5 plastic. It can withstand high temperatures inside the microwave, but it’s still questionable.

What happens when you microwave cup noodles?

Styrofoam cups are disposable cups designed for packaging, not cooking. When heated, it begins to soften, warp and can end up contaminating your food with some dangerous chemicals.

Chemical cross contaminations are very hazardous, so you should never take that risk. It will be much safer if you boil water in a different container then put it in the cup noodles.

Are There Other Types of Instant Noodles?

Other different brands in the market produce instant cup noodles. Based on this brand’s demand, most companies are now producing different types of instant noodles in cups. Below are some other brands that produce ramen noodles in cups and other packaging containers;

Some raven noodles are microwavable in containers, but it’s advisable to boil water in different containers. The materials the company chooses to use will determine if the containers are microwave safe, though most companies don’t seem to produce such containers.

There are a few labels on instant Noodles you should be aware of;

Unless the manufacturer advises that the cup noodles are microwave safe, then you should not microwave them. If you have a kettle or other means to boil water, prepare the noodles as per the instructions given

thekitchenprotech.com participates in the Amazon Services LLC Associates Program, which is an affiliate advertising program designed to provide a means for websites to earn advertising fees by advertising and linking to amazon.com.